The Aldrich Street district in the Mueller master-planned community continues to boom as retail, food, and entertainment offerings beef up in the area. This week, six new businesses announced they are heading to the popular area.

Bordered by Mueller Lake Park and Branch Park, the mixed-use district is anchored by an Alamo Drafthouse and the Thinkery children’s museum. In recent years, it has become a hub of activity for residents and workers in the community as well as tourists and locals who enjoy its walkable attractions, trails, and natural features.

Veracruz All Natural will trade in its food truck near the neighborhood’s Browning Hangar for a brick-and-mortar spot on the corner of Aldrich Street and Simond Avenue, where it will continue to serve its renowned tacos and fresh juices and a full bar to the mix. Tinys Milk and Cookies is scheduled to open its second Austin location—a walk-up window with outdoor seating, on the ground floor of the under-construction Origin Hotel—in 2022. Marufuku Ramen plans to open its first Austin location in 2022, on the ground floor of Shorenstein’s Alpha building on Aldrich Street.

In addition to the new eateries, Aldrich Street will become the new home of Austin Eye Studio, which will relocate from Hancock Shopping Center; Lone Star Pediatric Dental and Braces, which will expand to Mueller; and Vio Med Spa, which is opening its first Austin location. 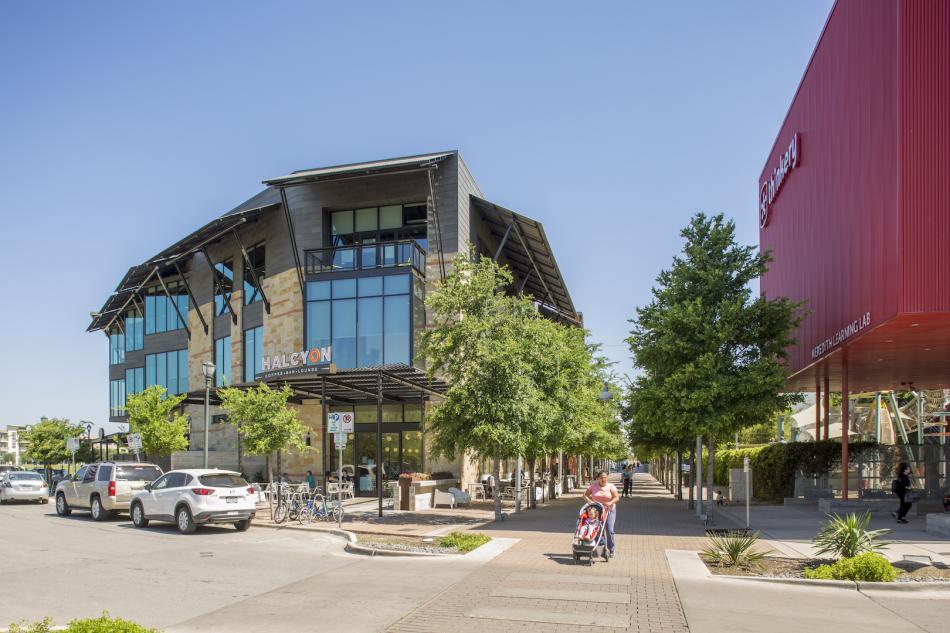 In general, Aldrich Street has become the locus of the busy construction landscape at Mueller, the 700-acre site of Austin’s former airport being redeveloped in phases as a joint project between the City of Austin Economic Development Department and Catellus Development. Residential and commercial projects in the works include Pearlstone Partners’ Parkside, a 200-unit condo project with eight ground-floor commercial spaces; 406-unit multifamily development AMLI Branch Park, which will also feature 23,000 square feet of retail space; the 120-room, five-story Origin Hotel, developed by the Thrash Group; Austin Energy’s four-story, 275,000-square-foot administrative offices developed by Catellus; and the aforementioned six-story, 235,000-square-foot Shorenstein Alpha office building, which, along with its planned Bravo building, will be the new home for the Teachers Retirement System of Texas.

Other development in the area includes the planned construction of a 130,000-square-foot, five-story medical office building by Gemdale USA and Ascension Seton’s 72-bed fourth patient wing. Meanwhile, the Texas Farmers’ Market has moved to the newly opened Branch Park Pavilion, which offers more than 19,000-square-feet of event space.

In addition to the Aldrich Street boom, Mueller is seeing the construction of multiple residential projects that will bring a total of 371 homes to the community. Also in the works are a 350-unit multifamily development by Ryan Companies near the former airport control tower (now an official city historic landmark), an 800-student Austin Independent District middle school to serve northeast Austin; and an extension of the Southeast Greenway, which will feature a skate park and pump track, courtesy of Catellus.