Natiivo Austin, the hybrid condo-hotel high-rise under construction in downtown’s Rainey Street district, is officially sold out of residences. Developers announced last week that the 248 residential units sold out ahead of schedule, with listing agent Prospect Real Estate’s Denise Bodman reporting that most of the 97 sales contracts written this spring were with second-home buyers and investors. Agents expect to begin closing on the units by the end of 2021 or early 2022.

The 33-story tower at 38 East Avenue—an unusual combination of residential building, short-term rental hub, and hotel—is the first of its kind in the country (a Miami Natiivo project is planned for a 2023 opening). Condos come with hotel licenses, offering owners the option of occupying them, leasing them out as short-term rentals, or some combination of the two. Units are available fully furnished, and the building offers hotel-like services and amenities as well as the option of having onsite hospitality management by MasterHost.

“Buyers have strongly embraced the flexibility of ownership that Natiivo’s represents, which is the first of its kind in downtown Austin,” said Harvey Hernandez, CEO of Newgard Development Group, which partnered with Austin’s Pearlstone Partners on the project. “Our buyers are drawn to the idea of a development that offers a concierge, resort lifestyle, knowing that at any time they can choose to lease their unit and reap the benefits of a steady income stream to cover their investment.”

In response to the sustained demand for more housing in its Downtown neighborhood, in May Natiivo released all of its 14th-floor condominiums —previously designated to be short-term rentals managed onsite—as residential units, available for buyers to use their primary homes or to rent out as they choose. The shift to a more even balance of residential and hospitality uses was also a turn necessitated by the changes, perhaps temporary, that the ongoing COVID-19 pandemic has brought to the travel and hospitality industries since Natiivo Austin broke ground in 2019. 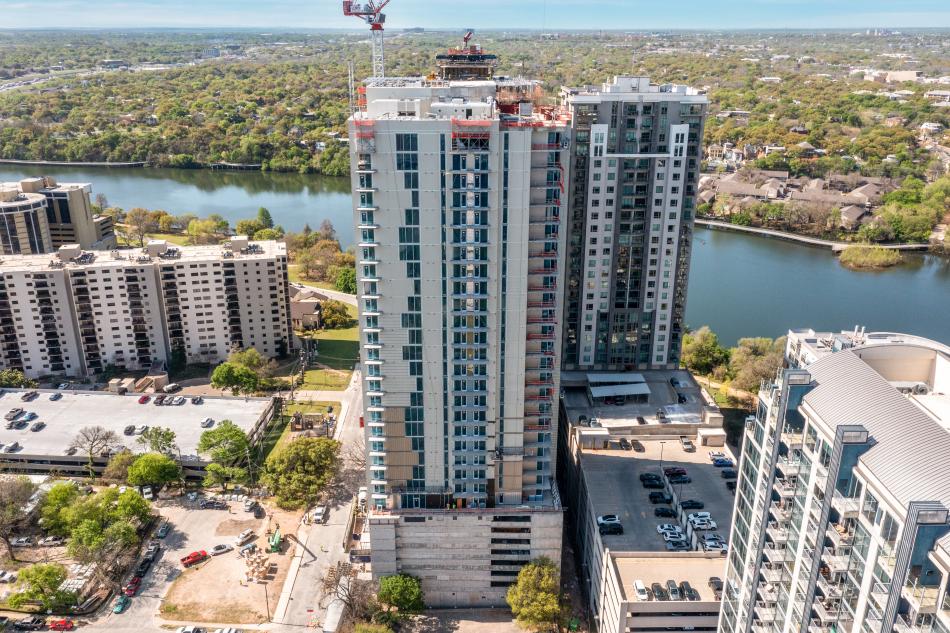 As for the building itself, construction continues apace, with glass-and-metal exterior wall panels, parking garage camouflage screening, and pool and amenity decks taking shape. Interior spaces are being readied for city inspections, owners, and furniture. Natiivo is expected to have its first temporary certificates of occupancy in September, said Prospect’s Denise Bodman, with the first move-ins likely in November.

Austin-based firm STG Design is the architect on Natiivo Austin, with also-local DWG designing the landscape architecture. New York-based INC Architecture and Design is responsible for the interiors, and AECOM Hunt is the general contractor. Additional project partners on the Natiivo building include Buie and Company, Cardno Civil and Environmental Consultants, DKC, Jackson Walker, Jordan and Skala Engineers, and MOD Intelechy.