A project that will bring unprecedented height and density to its East Austin neighborhood is officially headed for the 30 acres at 1011 and 1017 Springdale Road—and we now have a good idea of what it will look like.

Springdale Green, an office development for which the Austin City Council recently approved rezoning, is planned for the former site of an operation locally known as the “tank farm,” where petroleum and chemicals were piped in and stored for decades. While that use was discontinued in 1993 and the environmental damage has been somewhat mitigated, the property cannot be used for housing or public parkland due to contamination from past use. On June 10, council members voted unanimously to rezone the tract as a Planned Unit Development, clearing the way for California developer Jay Paul to build two six-story office buildings and a parking garage on the site.

Global firm Gensler recently released renderings of the project, which it is designing along with local landscape architect DWG. The two office buildings will offer 872,500 square feet of rental space and amenities including an 18,000-square-foot flex/conference space with a dedicated patio, a 23,000-square-foot fitness and wellness center, and an onsite parking garage with EV charging stations and bicycle storage.

DWG plans extensive restoration for the former brownfield site, which will feature nearly a mile of boardwalk, a jogging loop, and nature trails, along with areas for yoga, boot-camp workouts, basketball, volleyball, and more. The buildings will include 36,000 square feet of garden-like terraces with views that visually connect interiors to the surrounding natural areas. More than two-thirds of the site will be preserved and restored with native meadows, woodland, and plantings, as well as an urban creek tributary and removal of invasive plant species. 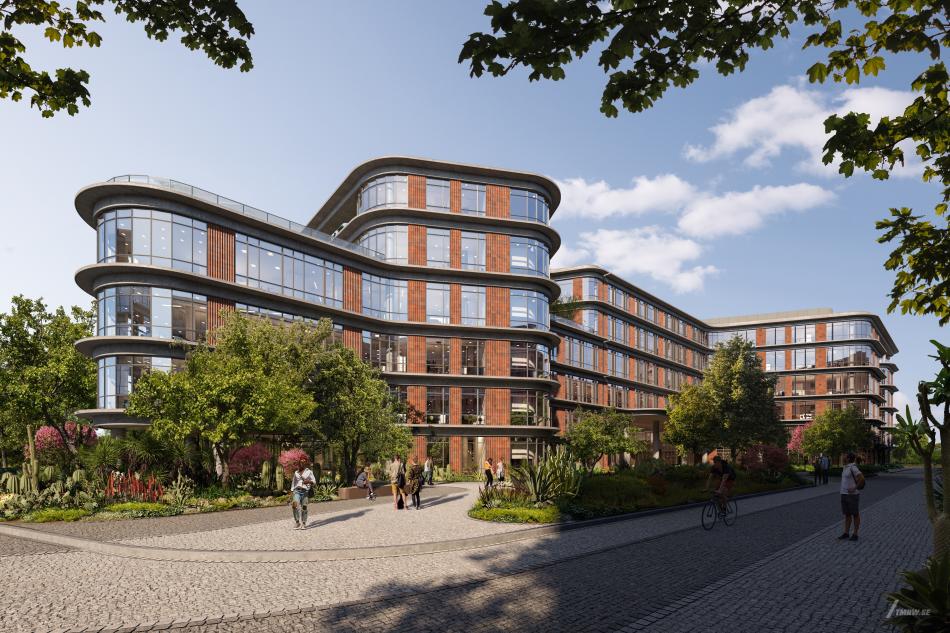 Springdale GreenCourtesy of Gensler and DWG 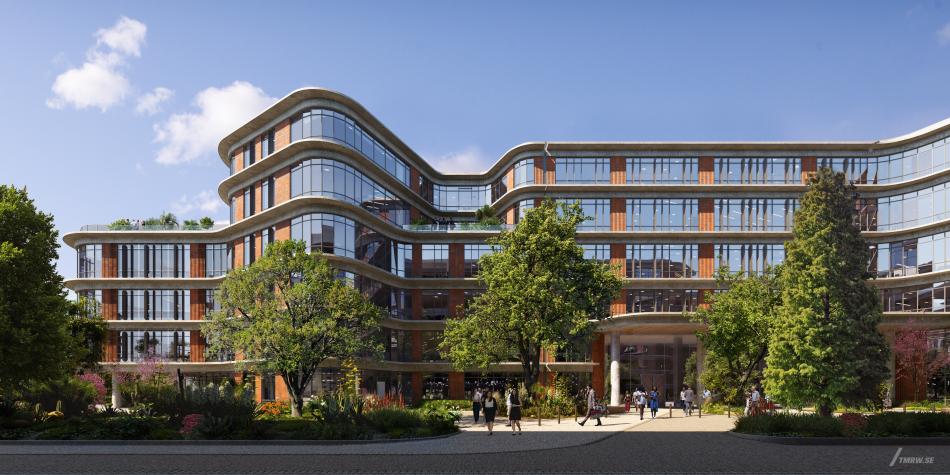 According to Gensler design director and project leader George Blume, the buildings themselves are designed “to create something unexpected in the architecture of Springdale Green—combining raw, exposed concrete and local terra cotta masonry results in a fluidity that is both familiar and futuristic” and “set against the backdrop of the restored landscape, a lush eco-paradise.” The campus is designed to be “immersive and engaging,” according to Gensler’s press release, “part backyard, part conference room, part social lounge. Each of these spaces will also be smart and technologically connected, flexible and scalable.” 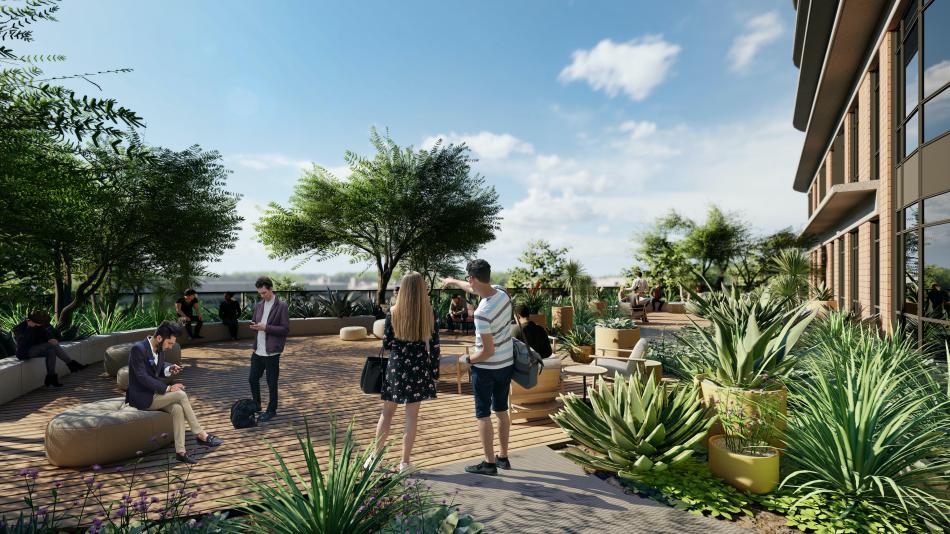 A terrace at Springdale GreenCourtesy of Gensler and DWG 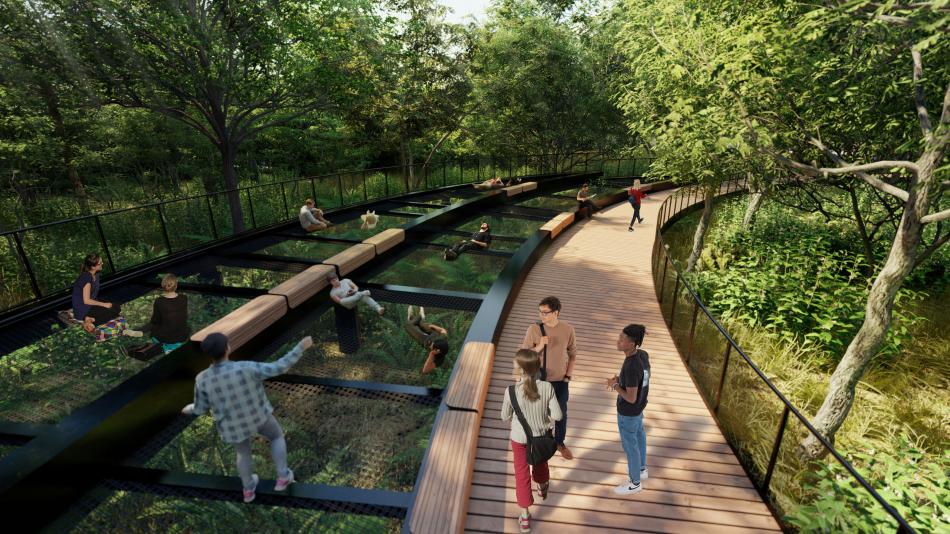 Springdale Green will include trails, a boardwalk, and other areas for outdoor activities.Courtesy of Gensler and DWG

The site will also contain a 600,000-gallon underground cistern to capture and store rainwater and air conditioning condensate for landscape irrigation. Rain gardens and a bio-retention basin will clean stormwater and help prevent downstream flooding; the latter has been a concern of neighbors during the development of the project, as significant portions of the property are in designated floodplain. “Springdale Green represents a paradigm shift—healing and restoring a neglected site into a native ecological landscape that is innovative and natural,” said Daniel Woodroffe, president and founder of DWG. 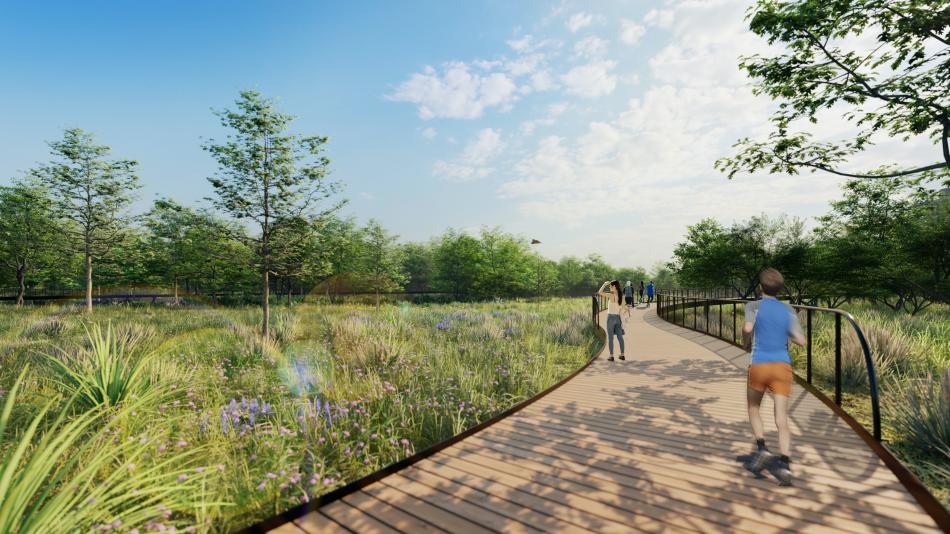 Springdale Green will feature a large trail and a restored natural landscape.Courtesy of Gensler and DWG 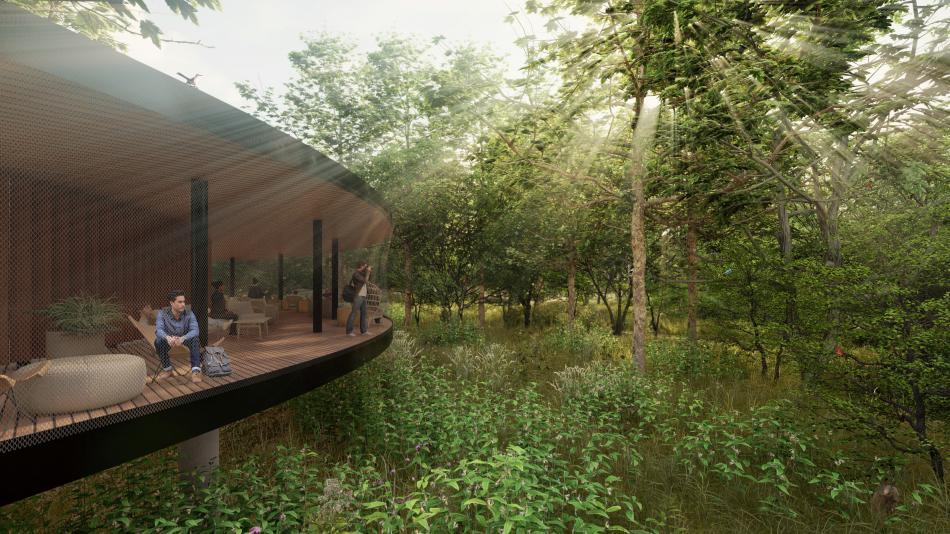 A Springdale Green terrace reveals the restored landscape.Courtesy of Gensler and DWG

Jay Paul aims to make Springdale Green Austin's first office campus to meet the standards of Sustainable SITES, a program developed by the American Society of Landscape Architects, the Lady Bird Johnson Wildflower Center at The University of Texas at Austin, and the United States Botanic Garden to align land development and management with sustainable design. The project is also targeting LEED Gold and Austin Energy Green Building 3-Star certifications.