A mixed-use tower that could rise more than 30 stories is on track to replace a midcentury office building in downtown Austin. The modern one-story structure currently occupying the property at 12th and San Antonio streets is owned by Delta Kappa Gamma Society International, a nonprofit organization for women educators that operates out of the building. It was built in 1956 and was listed in the National Register of Historic Places in 2012. In May, the Austin City Council approved DKG International's request to rezone the property, clearing the way for more density and much taller development.

Developer Stratus Properties is under contract with DKG to purchase the building, located at 416 W. 12th Street, and has plans to build a residential tower with ground floor retail on the site. The rezoning changes the property use from general office, which allows for residential and retail uses and "typically permits 120-foot maximum building height,"  according to a staff presentation at the council meeting.

Stratus is aiming higher; it's planning a tower that could reach up 375 feet in height, with 280 residential units above 6,000 square feet of ground-floor restaurant space. To expand the project's allowed square footage and height, the company plans to participate in the downtown density bonus program, which would allow a higher floor-to-area ratio and height of up to 400 feet in exchange for affordable housing or monetary contribution to the city’s affordable housing fund and following specific design and energy guidelines.

With rezoning achieved, the project is in the application and permitting phase and has not yet released or submitted site plans or drawings. However, the company submitted some preliminary versions of both to a 2020 meeting of the city Historic Landmark Commission, which sought a landmark designation for the property. (The proposal failed to get the supermajority vote that would have required City Council consideration.) Those showed use of a few elements of the original building, which was designed by Austin firm Kuehne, Brooks and Barr, in the new tower as well as a new structure that was well over 300 feet tall. 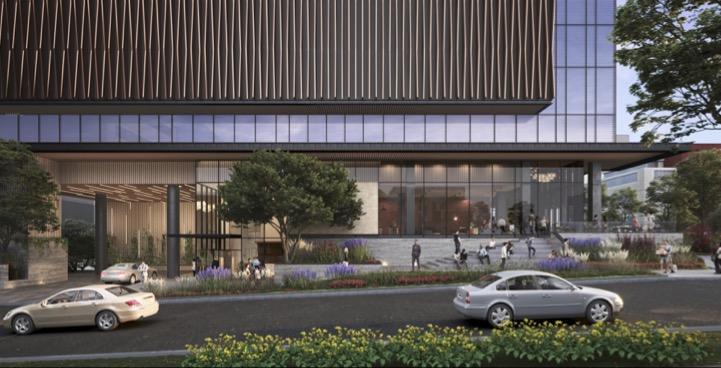 City staff's initial proposal for rezoning the 20,000-square-foot DKG property included a conditional overlay designating historic zoning as well as a 60-foot height limit; neither condition was approved in the final council reading. The current building will be replaced, and DKG, founded on the University of Texas campus in 1929, will relocate.

Chicago-based architect SCB is architect on the project; Austin-based Garza EMC  is the engineer and local company Blacksmith Collaborative is the landscape architect.