Massive state power-grid failures aside, Austin seems pretty bullish on electricity—at least when it comes to powering its vehicles. Long before Elon Musk announced Tesla headquarters would be moving to Austin—starting sometime between the sharp rise in local tech salaries and the groundbreaking for the company’s new car factory—one could spot the company’s electric vehicles, and EVs of other vintage, around the city. EV-charging stations have become almost standard for new developments and higher-end housing. On the public transit front, the local transit authority just purchased 200 electric buses and has light rail planned in the future.

Last week, Ford camped out in downtown’s Republic Square to help residents visualize their “electric future,” transforming the park into a showroom and test-ride track for its all-electric F-150 Lightning trucks and other new vehicles as well as showcasing the self-driving cars it has been testing on local streets. “Austin is home to 22 percent of all electric vehicles in Texas, and Austin Energy predicts 52,000 electric vehicles in the capital city by 2023,”  said Austin Transportation Director Robert Spillar at the event.

But with all that hoopla—not to mention both mandated and voluntary transitions away from fossil fuels altogether—is the city ready for an all-electric future? According to a recent Storage Cafe report, the answer is: Not really, but it’s more ready than others.

Does Austin's EV infrastructure measure up?

More specifically, the national self-storage search website (part of property-management software company Yardi) analyzed the 100 most populous US metro areas to rank their EV-friendliness. The study was based on 14 key metrics, including a metro’s current “number of registered electric vehicles, EV infrastructure including public and residential charging stations, the cost of an eGallon (cost of charging a vehicle using electric when compared to a gasoline-powered one), dedicated HOV (high-occupancy vehicle) and HOT (high-occupancy toll) lanes for EVs, and the share of roads which are in poor condition,” it reads. 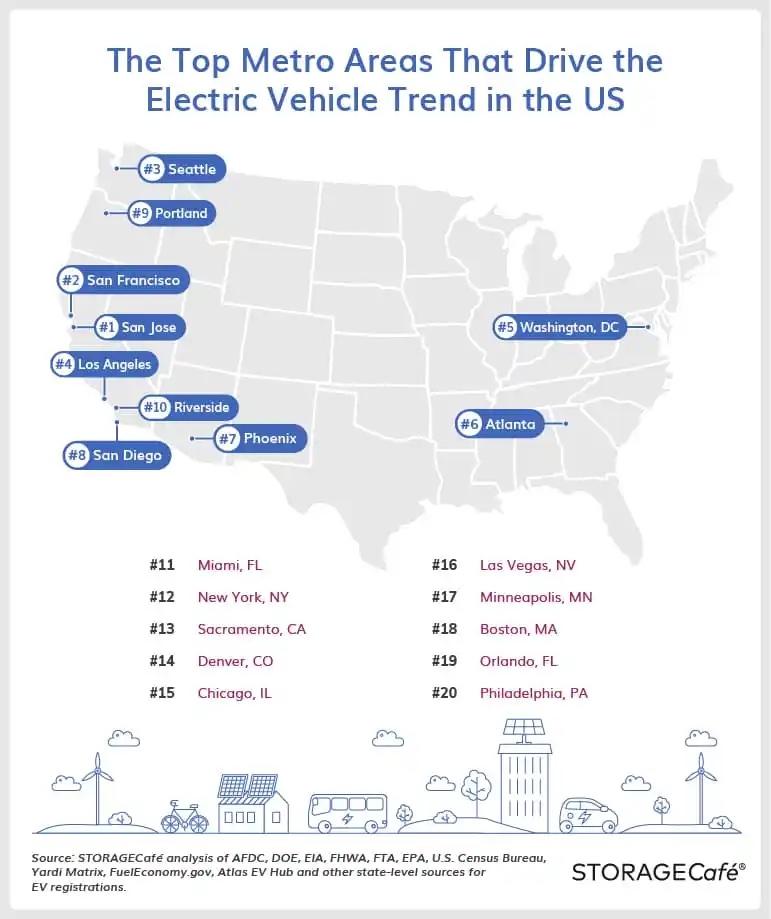 Austin didn't make the top 20, but it was kind of close (26th place).Storage Cafe

Other factors used in the rankings include carpooling statistics, local air quality, an environmental indicator that gauges “how much of a metropolitan area’s power comes from clean energy and how much of that is geared towards public transportation,” and—using somewhat specious logic when applied to all cities, but we’ll allow it—”self-storage availability" because "putting vehicles in storage when they aren’t used is common practice for many multi-vehicle owners.”

While the Austin-Round Rock-Georgetown metro area just missed the top quarter in the rankings, coming in at 26, it took fourth place for overall EV infrastructure due in part to its 570 charging stations, “about 0.7 charging stations per 1,000 households, and a cost of electricity of $1.0/eGallon,” according to the study. Its latest data also show that around 7,582 electric vehicles are registered across Austin and that the city has the 10th-highest number of apartment units (6.2 percent) in complexes with charging stations—almost double the national average of 3.2 percent.

While it's unclear if Austin is really prepared to meet either local or national climate goals, one of the experts the site consulted feels good about the chances for electric vehicles to help cities get there. “I'm relatively optimistic that we will see increasing penetration of EVs in the marketplace over the next decade with it becoming the dominant drive train for new car sales by 2030," University of Virginia’s Michael Lenox said. "The cost trajectory of batteries, which is the primary driver of the price of EVs, is such that EVs may become less costly than internal combustion engines by mid-decade. At this point, EVs will be preferable on the current dimensions of merit.”