A pocket of Downtown Austin that has been radically transformed in the past few decades could get a park — a pocket park, appropriately — that lays out the history of the area surrounding it.

The vacant lot at 64 Rainey Street occupies a small block northeast of the Emma S. Barrientos Mexican American Cultural Center and across the street from a few of the area's remaining bungalow-style buildings. Dedicated as city parkland in 2014, it has until recently served as a staging area for construction of high-rise 70 Rainey next door.

Now the city is ready to revisit the lot's parkland status with plans to develop it as a public space that nods to the Rainey Street Historic District's past.

The southeast Downtown neighborhood was in some ways jump-started by one of Austin's early housing crises, having been developed next to the (stop me if you've heard this one) rapidly growing central city in the late 19th century. It became a mostly residential, largely working-class enclave of small single-family houses that was cut off from other neighborhoods stretching to the east by the opening of I-35 in the 1960s — a common story during the country's Robert Moses-ification era.

Rainey remained a residential neighborhood for several decades and was added to the National Register of Historic Places in 1985. It was rezoned into Austin's central business district in 2004 and soon became an entertainment hot spot, with most of the bungalows transformed into bars and restaurants and empty lots into food truck courts. Now Rainey Street has entered its skyscraper phase, with multiple towers built and more on the way.

While it will be interesting to see how that tale plays out in the telling via the city's place-making vehicles (see the narrative placards in nearby Waterloo Park for an example of a history-light approach to a civic area with a similarly complicated past), the city seems to have its heart in the right place. 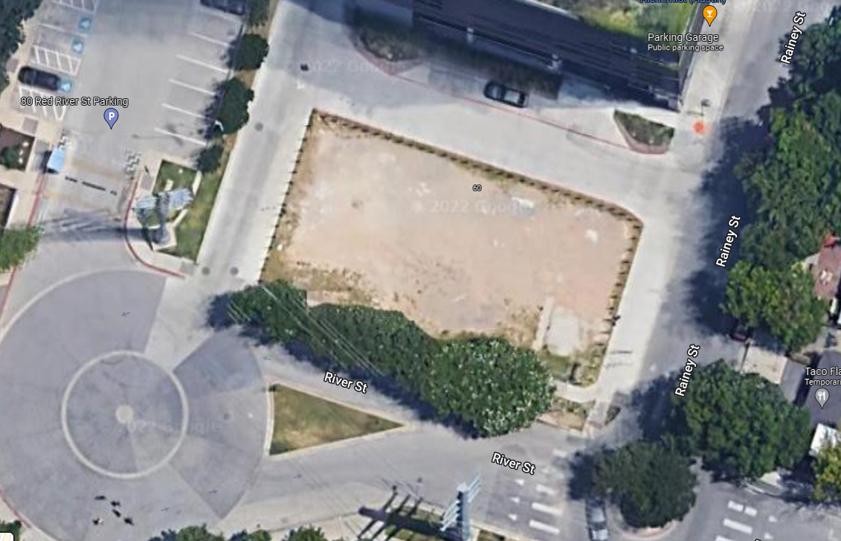 The lot at 64 Rainey Street will be developed as a pocket park.City of Austin

The Austin City Council recently passed a resolution directing the Parks and Recreation Department  to collaborate with the Mexican American Cultural Center Advisory Board to gather community input on the development of the parkland at 64 Rainey Street. To that end, the two groups have set up a plática (a community discussion) at the ESB-MACC Auditorium on Sept. 29.

"At the plática, participants will have the opportunity to review the recommended elements of the park space and provide guidance on priorities, experience the current space at 64 Rainey Street, share community memories, and work together with others on a charrette, creating different models of what could be possible in this space," according to a city press release. More opportunities for information and feedback will be available at the ESB-MACC during Viva Mexico (Sept. 17) and Austin Museum Day (Sept. 18).