The proposed redevelopment of a three-acre site on a stretch of South Lamar Boulevard moved forward, a little, at a recent City Council meeting, with some caveats from Council Member Ann Kitchen, who represents the district where the lots are located.

Developer John Warnock, who was represented at the October 14 meeting by Armbrust and Brown attorney Michael Whellan, has applied for rezoning for several contiguous lots on the west side of South Lamar (plus one around a corner, at 2803 Skyway Circle) from the several different designations they have currently to multifamily residence highest density (MF-6) district zoning. All but one of the lots are currently zoned or have a conditional overlay for Vertical Mixed Use, which would be removed if the proposed rezoning takes place. City staff recommends that change, although the city Planning Commission did not issue a recommendation due to a lack of an affirmative vote.

The change would allow for more density on the lots than the current zoning permits, and the developer plans to build up to 500 apartment units there. The redevelopment would require the removal of one existing fourplex and the structures where a smattering of businesses—most notably Gordough’s Public House—currently operate. (The specific addresses are: 2700, 2706, 2708, 2710, and 2714 South Lamar Boulevard, part of 2738 South Lamar Boulevard, and 2803 Skyway Circle.)

While a portion of the site is in the Barton Creek and West Bouldin Creek watersheds, the primary issue rezoning raised at the council meeting concerned affordability rather than environmental issues. Lorraine Atherton, a member of the Zilker Neighborhood Association, spoke to that concern at the meeting, saying that the change would remove the onsite affordable housing required by the Vertical Mixed Use zoning currently in place on the tracts. Atherton also submitted a letter detailing the Zilker Neighborhood Association zoning committee’s reasons for objecting to the change. 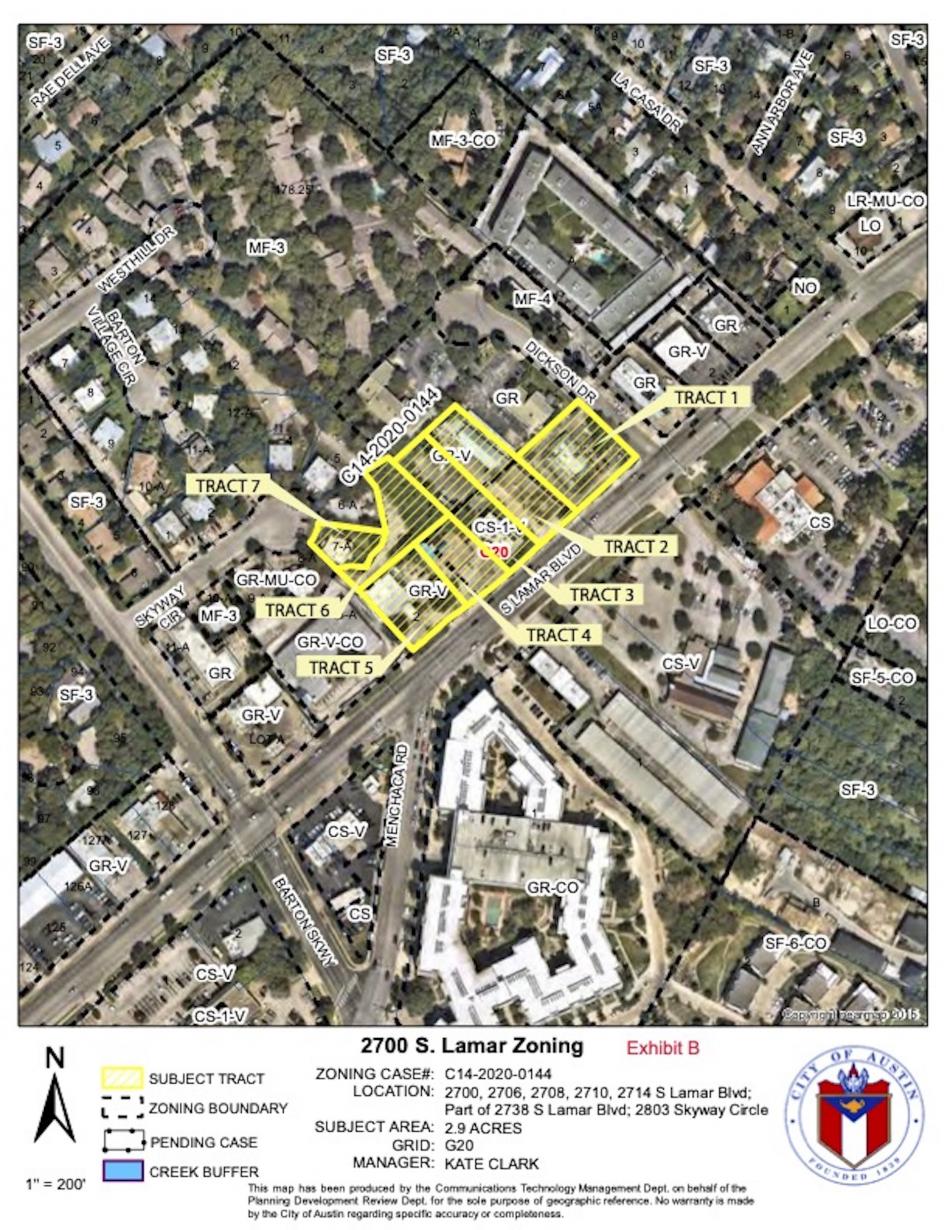 The tracts on South Lamar that the Austin City Council is considering rezoning for multifamily development are marked in yellow.Via City of Austin

According to the staff report submitted prior to the meeting, the developer intends to provide affordable housing (at 60 percent or less of area median family income) in 10 percent of the new units on a voluntary basis. In addition, according to the report, "the applicant has stated that they are 'committed to providing a tenant relocation package for the four impacted units, as well as a "right to return" to the new affordable units for eligible tenants.'”

While the item passed on consent on first reading, Kitchen noted that she would likely object to it on future readings if there is not a way to ensure that the new development includes some onsite affordable housing.